Genre(s): Thrash Metal
Formed in São Paulo, São Paulo - 2003. The initial idea to form the Ancesttral came in 2003, but was resumed only in 2005 with the recording of the EP Helleluiah. In 2006, the band began preparing for their first album, The Famous Unknown, completed in 2007, with special participation of Vitor Rodrigues (Torture Squad), Roger Lombardi (Goatlove, former Sunseth Midnight), Paul X (Monster) and Heros Trench (Korzus). The Famous Unknown was elected the best album cover of 2007 national and got the sixth place among the best discs of 2007. Furthermore, the band also won the third place among the bands revelations of the same year held by the magazine Roadie Crew. Musically, the references come from names such as Metallica and White Zombie, but because of the background of the musicians, also follows the school of trash metal practiced in the late 1980 and early 1990 as Metal Church, Testament and Slayer.
Source: http://www.ancesttral.com/port/press.htm, march 2011.
http://www.myspace.com/ancesttral
Discography:
Demolition Man [Demo, 2003]:
1.Demolition Man 04:32 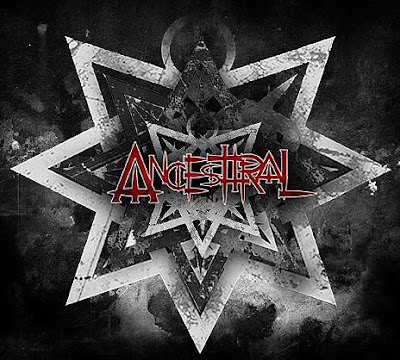 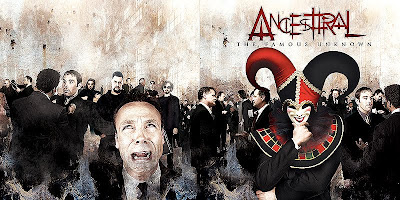 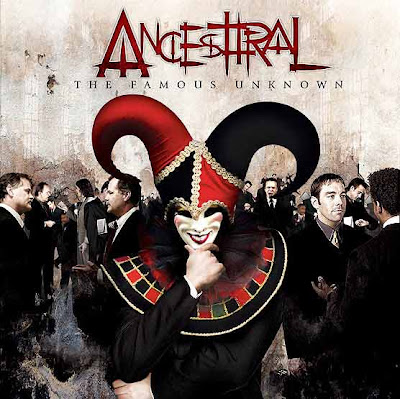 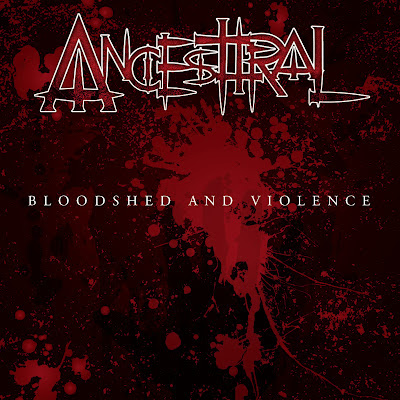 Genre(s): Death / Thrash Metal
Formed in Catalão, Goiás - 2005. Formed in mid-2005 Catalan-GO counting initially with Mark (ex Infects) on drums, Matthew on vocals / bass guitar and Ayres under the name "Verminus Corpus. " The formation is stabilized and some concerts are performed under the name "Ancestral Incursion" for a brief period, being established as Ancestral Terror. In August 2006 they recorded their first record in a studio (Hallways of Pain), produced by the band and released in September of that year. 6 tracks are mainly directed to the Death / Thrash Metal, especially the old school of metal. After recording, Charles Edward assumes the bassist Mathieu and so it is up to just the vocals. In February 2007, Carlos Eduardo left the band, returning to the first lineup. The subjects portrayed in the letters circulating on religious corruption, war, bloodshed ancestors, iconoclasm, among others.
Source: http://www.metalclube.com/novo/entrevistas/3154-matheus-ancestral-terror.html, march 2011.
Discography:
Hallways of Pain [Demo, 2006]:
1.Violent Incineration 05:25
2.Dark Dungeons 05:29
3.Hallways of Pain 05:51
4.Call Upon Death 04:07
5.Merciful Strike 04:13
6.The Endless Incursion 02:32
Matheus - Vocals/Bass, Ayres – Guitars, Marcos – Drums. Backing vocals on 'Violent Incineration' and 'Merciful Strike' - Matheus, Ayres and Marcos. 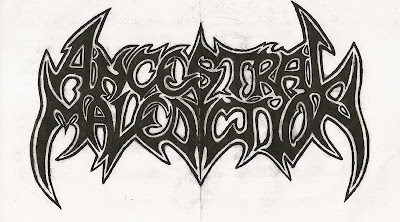 Genre(s): Death / Black Metal
Formed in Tremembé, São Paulo - 1994. Ancestral Maledition was formed in 1994. after several trials we launched our first demo tape in 1998 with the title of No Mercy, in 1999 we launched our second demo tape entitled ANCIENT contradictions, this material allowed the band to release a split CD with the band Ophiolatry by Brazilian label Millenium recs today mutilation recs, and for that label in 2001, we launched the first CD titled DEMONIAC ​​HOLOCAUST, this cd was a lever to history of the band, who made a tour through Brazil from north to south in 2002. Several concerts were held to release the band expanded, both in national and international scene since the closed Mutilation recs disclosure of the Demoniac Holocaust by Listenable Warlord of Italy and France. In 2004 come into the studio to record their second album, the album was then released in 2005 with the title of BLACKNESS HUGE, with this release the band has been gaining greater attention by the media specialized in heavy music, and interviews in major magazines and materia as Rodiecrew, RockBrigade, Luciferising, Metal Head and between other underground style. Ancestral Malediction The band also performed shows with big names in heavy music, exponent of Death Metal bands like Morbid Angel, Deicide, Monstrosity, DESASTER, INCANTATION, Disgorge, FUBAR, and also the great names of our national scene as Krisiun, Funeratus, Torture Squad, Rabaelliun, Holder, and Ophiolatry etc ... The last show was performed by the band in Vitoria ES, in 2006, so the band ended its activities at least for a time, because the personal life of one of the MEMBERS, had to be put forward. Turning our activities in 2011 with a new member, who came to give strength to the band's return, because death metal has always been alive within each member of the Ancestral Malediction.
Source: http://www.myspace.com/ancestral_malediction, march, 2012.
Discography:
No Mercy [Demo, 1998]:
1.Worshipping the Supremacy
2.Holy Deceiver 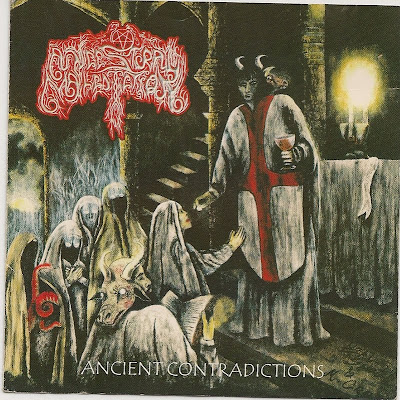 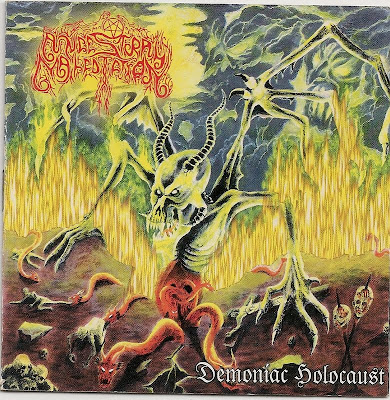 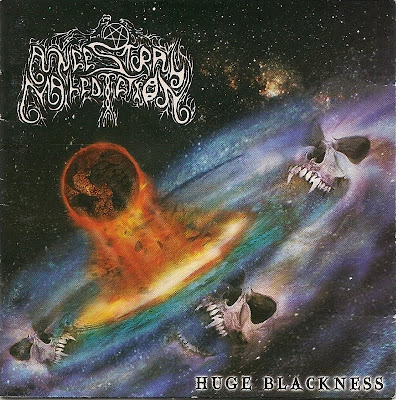 Formed in São Paulo, São Paulo - 1996. Band Formed in 1996 with the purpose to make a heavy sound, aggressive and fast, being inspired by great icons of death metal in 1997 recorded the demo "My Condolences" who has had a great impact on the Brazilian underground scene and very well received by critics specialized. The band played several concerts in Brazil and played with Torture Squad, Krisium, Genocide, and several bands of heavy national scene. After several lineup changes, with consolidation in 2003 for a more stable release the demo "Insanity Conflict" repeating the great response from the previous demo, culminating with an invitation to opening for Vader in Brazil. After more lineup changes due to personal problems, the remaining members, along with the new line up is back in business, becoming heavier and more aggressive, taking the flag ahead of the metal with the launch of new compositions. Gerson Roschel (Guitars and vocals), Adilson Costa (bass and vocals), Mauritius (drums), Roberto (Guitars). Genre(s): Death Metal
Formed in Rio de Janeiro, Rio de Janeiro - 2000. The Anax was formed in 2000 in Rio de Janeiro.The idea of the band is doing a Death Metal fast, heavy and technical, with influences of bands: Cannibal Corpse, Death and Morbid Angel.As lyrics deal with a story based on the literature we reading.This begins with the Legion Antichrist album, Kill The Forgiveness and etc.We're not Christian, and do not support Christian bands.Gillian Relvas = Voice and Guitar, Marcio Ribeiro = Bass, Silvio Rocha = Drums.
Source: http://palcomp3.com/anax/#, march 2011.
http://bandasdegaragem.uol.com.br/banda/anax/blog
Discography:
Legion Anti-Christ [Full-length, 2001]:
1.Demon Disfarce of Angel
2.Dinasty
3.The Exodus
4.Devil's Night
5.Legion Anti-Christ
6.Save Your Time
7.Destruction Kill the Forgiveness [Full-length, 2002]:
1.Kill The Forgiveness
2.Anax
3.Satanic Intervention
4.Hate In The Clouds
5.The Garden Of Youth
6.Children Of The Possessed
7.Wolf Of The Dawn Genre(s): Metalcore / Death Metal
Formed in São Bernardo Do Campo, São Paulo - 2007. In January 2006, came an idea that initially had not a right way, who got carried only by the will of its creators to realize what really mattered to them. A sound that causes them the same feeling that awakens in those who hear. Artist and audience simultaneously. This idea is called Anátema 7. The band is trying to show at this time, as many bands in the underground scene, all its essence. With melodies and riffs that often arise from the inspirations of other metal and hardcore, the band mixes that element with lyrics that are a dissertation of reality, the portrayals of unconventional and leaving vivid glimpse of the ideology of each component making the listener to think again about the most sensitive subjects such as politics and religion, often go unnoticed by most people.
Source: http://bandasdegaragem.uol.com.br/hotsite/musicas.php?id_banda=10494, april 2011.
http://www.myspace.com/anatema7
Discography:
Demo [Demo, 2007]:
1.Soldados de Chumbo
2.Lacuna
3.Caos
4.Hiperbole
5.Estaca Zero